Paper Menagerie and other stories by Ken Liu

Paper Menagerie and other stories by Ken Liu

The Paper Menagerie and Other Stories is a book written by prominent Asian American author Ken Liu. It tells the story told through the lens of young bi-racial boy named Jack, who has a white father and a Chinese mother. The story tells the difficulties that Jack faces in regards to his identity, as the relationship between Jack and his mother becomes increasingly strained. It touches upon the trials and tribulations that the children of immigrants often face as a part of the immigrant story.

“The key short story of the collection really resonated with me – it discusses the cultural disconnect that happens between a first-generation immigrant and their child(ren), and it does so in such a human way that it left me tearing up and feeling all the more grateful for my own parents.” (Weizhen Sheng, E’20) 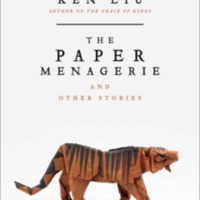